Difference between revisions of "GPU Instancer:FAQ"

What are the Minimum Requirements?

How does GPU Instancer work?

GPU instancing works by sending mesh/material data to the GPU in a single draw call. This reduces the amount of batching to one even if there are hundreds or even thousands of the same mesh/material combination. This removes the bottleneck that occurs when sending mesh and material data from CPU to the GPU, and results in higher fps if there are many of the same mesh-material combinations. That is, GPU instancing helps in scenarios where you have many instances of the same game object.

GPU Instancer further builds on this concept by applying various culling and LOD operations directly in the GPU and rendering only the relevant instances on the screen. This is why frustum and occlusion culling systems included with GPU Instancer are designed to work with GPU instancing only. What they do is to reduce the number of objects drawn for each prototype that are defined on the GPUI Managers. So let's say you have 1000 instances of a prefab - to draw these, GPU Instancer makes only 1 draw call with the count 1000 (this count is stored in GPU memory). When you use frustum and/or occlusion culling, this count is modified in GPU according to culling results. So it makes 1 draw call with a count less than 1000 - and rendering speed up further because there are less objects that are actually rendered.

How to add remove prefabs at runtime? 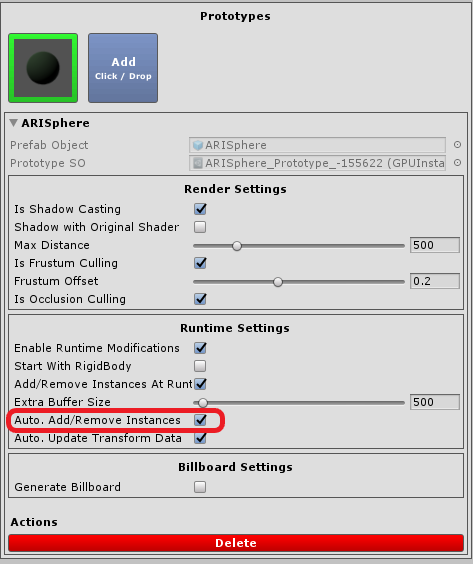 How to convert shaders manually to support GPU Instancer?

How to build for Android platforms?

How to define multiple prefabs at once?

How to render prefab instances without instantiating GameObjects?

How does Hi-Z Occlusion Culling work?

In occlusion culling (in general), the most important idea is to never cull visible objects. After this, the second-most important idea is to cull fast. GPUI's culling algorithm makes the camera generate a depth texture and use this to make culling decisions in the compute shaders. There are various advantages of this (e.g. you don't need to bake occlusion maps, can use culling with dynamic occluders, etc.) and it is extremely fast since all the operations are executed in the GPU. However, the culling accuracy is ultimately limited by the precision of the depth buffer. On this point, GPUI analyzes the depth texture, and decides how accurate it can be without compromising performance and culling actually visible instances.

As you can see in the images below, the depth texture is a grayscale representation of the camera view where white is close to the camera and black is away. 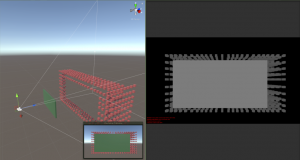 As the distance between the occluder and the instances become shorter with respect to the distance from the camera, their depth representation become closer to the same color:

In short, given the precision of the depth buffer, GPUI makes the best choice to cull instances for better performance - but also without any chance to cull any visible objects.